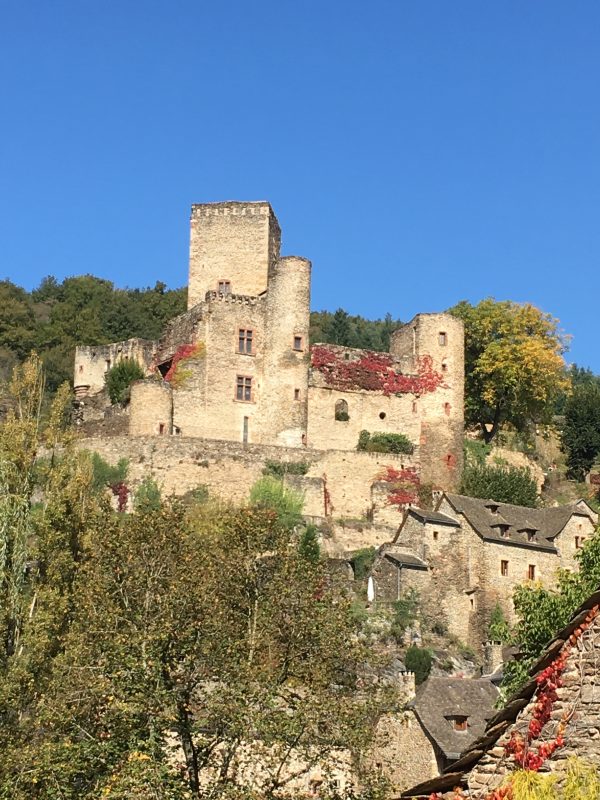 When you think of France, one of the first images that springs to mind is Paris, its beautiful capital city. The iconic Eiffel Tower, the masterpieces hanging in the Louvre, the majesty of Notre Dame cathedral, walking hand in hand with your loved one along the Seine……But like most European countries, the wealth, culture & heritage of its capital owes much to the villages that lie beyond.

Throughout the landscape of France, you will find more than 32,000 villages; each with its on character carved out of centuries of history & tradition. Its people, geography, culture & cuisine all adding to its rich heritage and uniqueness. Only a select few (just 155) have been accepted & classified as “Les Plus Beaux Villages de France” (the most beautiful villages of France) and none exemplifies the collection more than the medieval village of Belcastel in SW France.

Hidden deep in a valley, along the banks of the river Aveyron, Belcastel is a breathtakingly beautiful village. It’s not until your final approach, descending through the dense surrounding forests, that its full glory comes into sight. Perfectly restored & renovated honey-stoned buildings; the meandering river flowing under the 15thcentury arched bridged and, as you look skyward, the jewel in the village’s crown reveals herself, the Château de Belcastel. 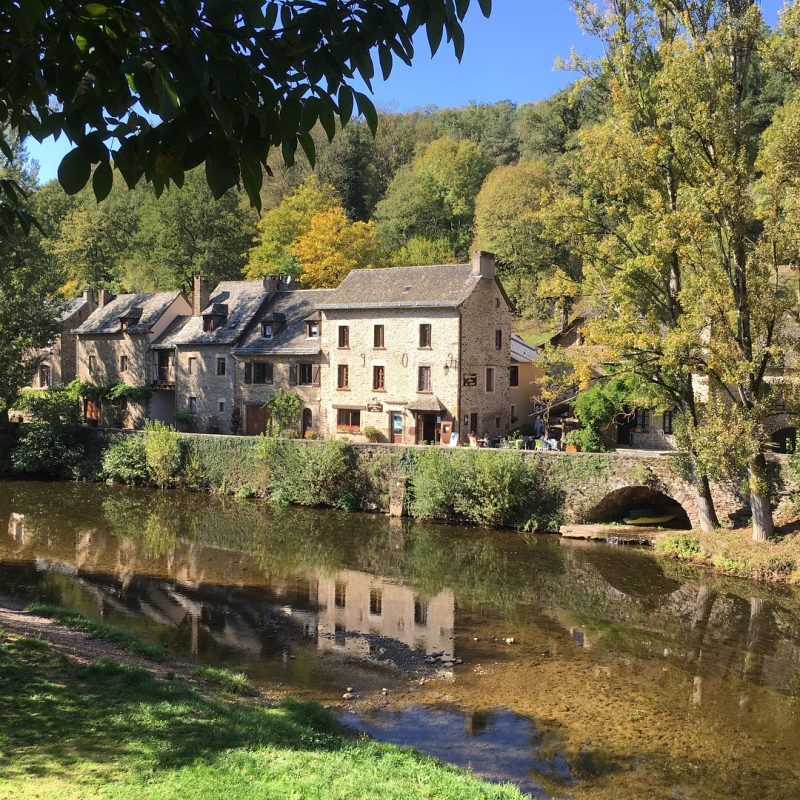 Under the rule of Charlemagne (8thcentury) the law of the land of France decreed that nobles had an obligation to protect the inhabitants of their territories. The humble chapel which once stood high about the riverbanks was transformed into a fortress; from here, the vantage point over the river, below, helped provide protection for the villagers from unwanted intruders. During medieval times, the fortress became a chateau to the Lords of Belcastel and in the 15thcentury the village’s famed arched bridge and church were built by the noble family of Saunhac.

However, the turbulent times ahead through the 100-Year War and the Crusades were disastrous for this corner of France and its nobility. The chateau passed through various hands (some through peaceful acquisitions, others through bloody sieges) – with each, falling further & further into disrepair. In 1810 it was sold to a villager by the name of Rose Acquie who profited from the small amount paid (just 300€ in today’s value) by unceremoniously selling off the chateau’s ancient masonry stone by stone!

It was not until 1928 when the French government stepped in and declared Chateau de Belcastel a “Monument Historique” – in doing so, providing the much-needed protection from being it being further dismantled. Whilst this label prevented further desecration of the structure itself; laying desolate and vacant for the next 46 years meant nature itself taking over.

In 1973, renowned French architect Fernand Pouillon visited the village and fell in love with the crumbling ruins and saw beyond the ivy and undergrowth that met his eyes. Pouillon had a vision to breathe life, once again, into Château Belcastel and in 1974 he completed the purchase (according to rumours, paying entirely in solid gold bars). Thus began a painstaking 10-year restoration and, in doing so, inspired others in the village below to restore their own properties and put Belcastel back on the map. Sadly, a short two-years after the restoration, Pouillon died.

In 2005, owner of the New York “AFA” art gallery, Heidi Leigh, purchased the Chateau and the final phase of what visitors can now experience today commenced. Heidi’s tenure as owner has seen the chateau transformed into a stunning visitor attraction that allows the public to walk back through & experience 1,000 years of history. Combining her passion of the arts sees the chateau’s walls adorned by original pieces of armour & artwork in what must be one of the world’s most awe-inspiring art galleries.

A self-guided tour gives the complete history of the chateau from its humble origins through its rise & fall over the centuries – paying homage to the vision of Fernand Pouillon who had the spectacular foresight to have brought the chateau back from the abyss of decay and, in doing so, reinstating a pride throughout the whole of the village.

Belcastel, as recognised by its inclusion in the Les Plus Beaux Villages de France, is a wonderful place to visit. The 15thcentury bridge leading to the church is a must-see; the church contains four nationally listed statues dating to the medieval period and houses the tomb of its founder, Alzias de Saunhac. The river Aveyron, from which the surrounding Department takes its name, has some wonderful vistas and walks in either direction from the heart of the village and provides the focal point as you walk up the steep cobbled streets, admiring the restoration of the ancient village homes along the way.

… and befitting of the village, you can dine in the superb Michelin Star restaurant “du Vieux Pont”. Its riverside setting (as its name suggests opposite the old bridge) has been in the same family for three generations. The current family member & chef-patron, Nicole Fagegaltier, specialises in beautiful dishes created from the abundance of fresh, local & seasonal produce from the Aveyron region. 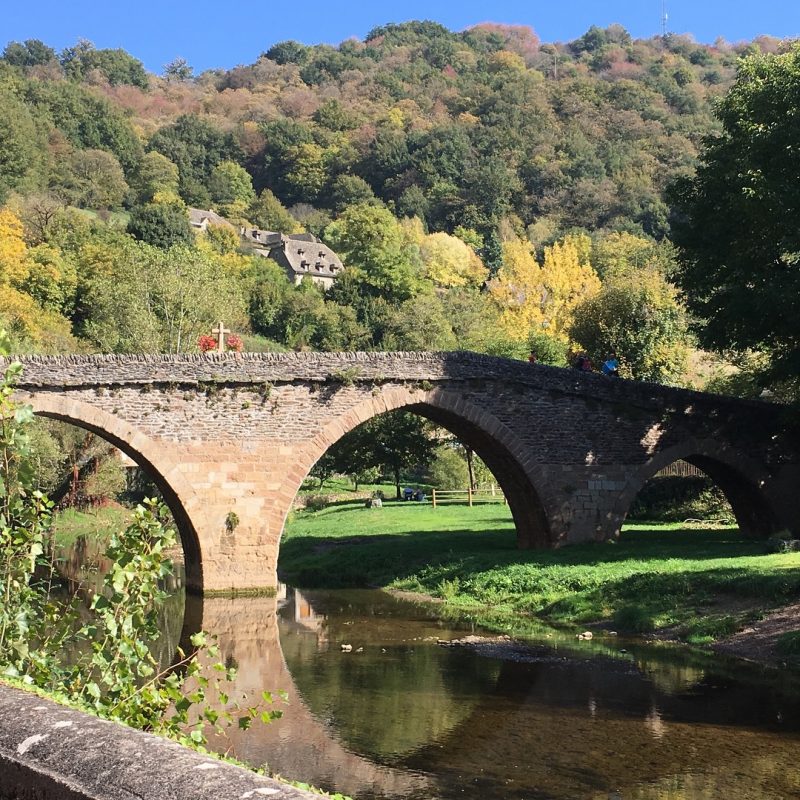 Of course, in planning your visit you may want to stay & night or two and live the dream of staying in the heart of a medieval village. Not only can you enjoy the Michelin Star hospitality of du Vieux Pont’s own hotel rooms (on the opposite bank of the river, besides the church); you can also stay in the tower suite inside the Chateau itself!

Belcastel is located in the Department of the Aveyron (one department above us in the Tarn), the nearest mainline railways station and airport are in Rodez (12 ½ miles). Belcastel can be visited on route to/from La Villa if your travels are taking you to the Dordogne & beyond.