Les Grands Buffets in Narbonne – France on a plate

Treat your tastebuds in the largest restaurant in France 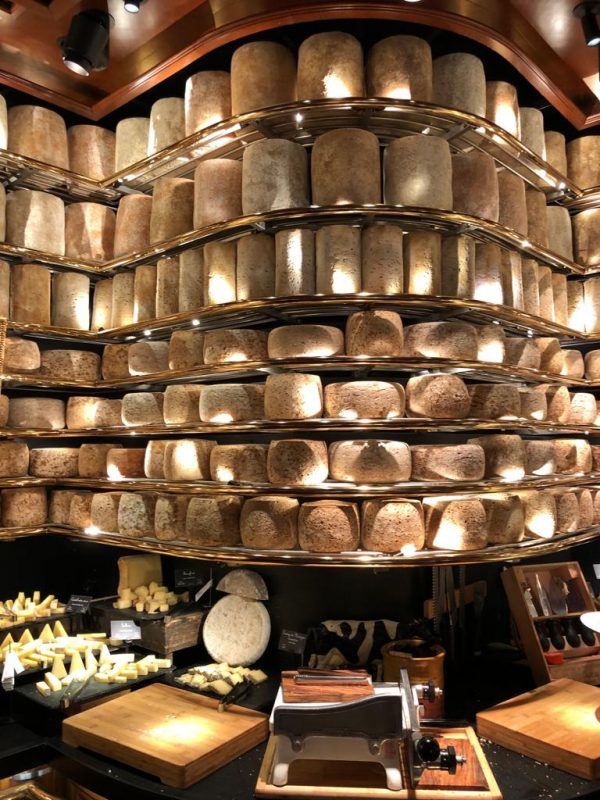 Imagine walking into a royal dining hall. In front of you, a chef slicing eight legs of ham; to your left, a massive pile of macarons; in the distance, a mountain of prawns and lobsters. Watch out! A waitress just ran past you carrying an enormous tray of short ribs. And you hear the rotisserie chef calling out the made-to-order dishes in his microphone as the sous-chefs shout back “Oui, chef!” Walking into Les Grands Buffets had us reliving our childhood, like the first time we visited Disneyland, except with food.

In 1989, visionary entrepreneur Louis Privat opened Les Grands Buffets as a “window into the world of French cuisine”. He lamented the demise of the local bistro tradition and his purpose was to restore it to its former glory. He would not do it town by town, but in one venue in the southern French city of Narbonne, his home.

With 75% of the population vaccinated in France, the health pass mandatory for dining out, and having read that Les Grands Buffets invested €3.5M upgrading their facilities, we took a 90-minute adventure down Narbonne to treat out tastebuds.

So, what exactly is Les Grands Buffets all about? In simple terms, Les Grands Buffets is fine dining meets a luxury hotel buffet. However, this does not even come close in describing the experience. Indeed, for the fixed price of 42.90€, diners will feel like they have been invited to feast in the company of kings and queens. You will get lost without your map of the premises. Your senses will be over-stimulated with the vast choice of stews and roasts and hams and seafood and cheeses which, for the most part, originate or are produced in the Occitanie region (the 2016 merger of the Midi-Pyrénées and Languedoc Roussillon).

On arrival, members of staff warmly greeted us and personally escorted us to our table. You will be seated (as per your choice when reserving) in one of five great dining areas; one outside during warmer months – a stunning, almost tropical garden terrace – and four inside, including a VIP dining room more suited to families.

As we look around, the elements of fine dining shine through with crisp white linen tablecloths and napkins, polished silverware and glassware. In our dining hall, the tente d’apparat Jean-Baptiste Nolin (geographer to the Duke of Orléans Philippe II, and engraver to the king Louis XIV), flames are dancing on the candlesticks, and the soft splashing sound of the waterfalls echo off the rich and colorful drapes and hangings. 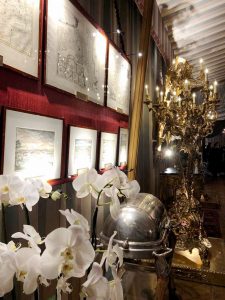 The only hard choice we had to make was picking the wine from the extensive list. Tip: seek the opinion of your maître de rang! Ours was excellent – knowledgeable, charming and attentive. We clink glasses, have a sip of a beautiful AOC Pic Saint Loup and stand up. The all-you-can-eat feast is about to hit our senses. Ready to head up to the buffet?

The buffet is generously displayed in four main stations – starters, rotisserie, cheeses and desserts. At the Hors-d’Oeuvres station, you will find wonderful antipasti, local oysters, crabs, and lobsters, fois gras served six different ways and one of the most diverse arrays of charcuterie you will ever see. 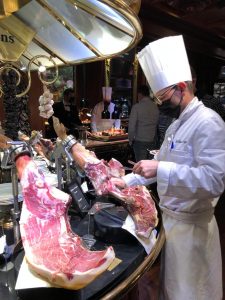 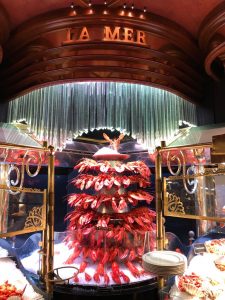 Remembering there are three more “courses” to our Grands Buffets experience, we grab a plate for the second and largest section. Each chafing dish contains a mouth-watering creation from a rich daube of beef to ratatouille, from breaded frogs’ legs to cuttlefish à la Sétoise. The room also features the pièce de résistance of Les Grands Buffets: the rotisserie. Fay ce que tu vouldras (“Do as you wish”), a quote from Gargantua, towers over the chefs below who prepare dishes to order, from lièvre à la royale to lobster thermidor. You have to pinch yourself to remind you of the value your meal represents. We both went back for seconds.

If fromage is for you, you may never want to leave the next section! Will you be able to sample the 101 different cheeses on offer? (A world record inscribed in the Guinness Book of Records.) Representing every region in France, and some from further afield, they are graded by strength to make beautiful tasting plates. 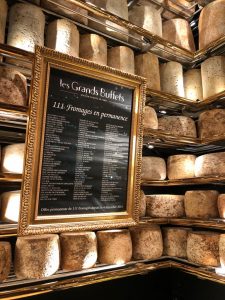 By this point of your meal, we remind ourselves that there is still one highly important section left to visit: the desserts. As with each aspect of the restaurant we have sampled before, we were not disappointed with the sweet finale. The pastry chefs in the kitchens are kept busy throughout the day preparing over 100 different desserts including Paris-Brest, tarts, éclairs and the quintessential macarons which must be a favorite as 1,000 are consumed every day. There is even an ice-cream parlor where you can indulge in profiteroles or a cheeky Colonel (lime sorbet with a splash of vodka, my grandpa’s favorite!)

To complement the food, another major feature here is the gargantuan wine list with every bottle charged at the cost price the restaurant pays the vineyard. To boot, most of the 70 entries can also be enjoyed by the glass, all adding up to a staggering 80,000 bottles being consumed by guests annually.

After three hours and with incredibly full bellies, it is time to leave. A final chat with very friendly staff and a last look at the early 20th-century chandeliers and gramophone. What an evening!

Les Grands Buffets is open 365 days of the year and reserving a table is very simple via their website. You can normally reserve up to 7 days prior, although to accommodate the huge influx that July & August brings, the booking calendar is extended. However, do plan your visit well in advance and combine it with the wonderful city center of Narbonne, where you can discover the City’s Roman origins, the stunning cathedral, the Canal du Midi and a number of art galleries and markets.

For more information visit Les Grands Buffets website and the Office of Tourisme for the city of Narbonne.