If you have some friends coming for dinner, this is a great make-ahead main course that’s sure to impress! 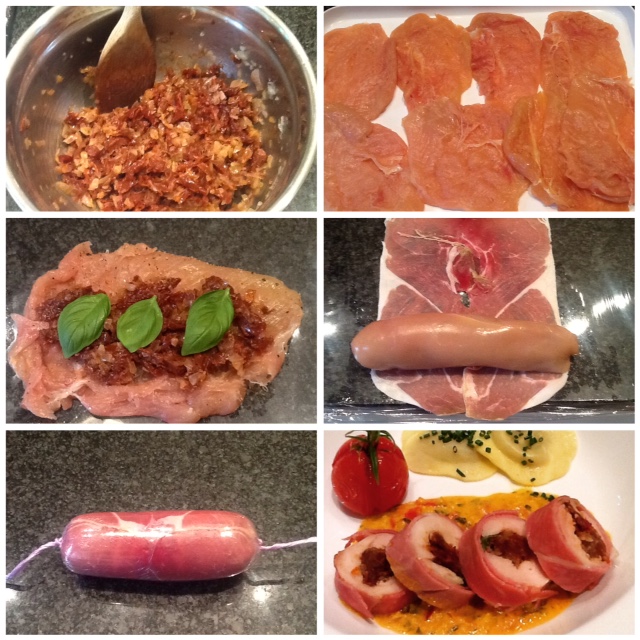 Heat a little olive oil in a non-stick pan and add the onion & garlic and sweat down for 8 mins. Remove from the heat and stir in the diced sun dried tomatoes; set aside and allow to cool completely.

Sandwich the chicken breasts (separately) between layers of clingfilm and, using a rolling pin, bash them until they are flattened and less than 1/2 cm thick- set aside on a large plate and season with salt & pepper.

To make your ballotines, add two table spoons of the onion & tomato mixture to each of your flattened chicken breasts and spread out – place three basil leaves as shown. Roll the chicken breast to create a large sausage and then place on two slices of Serrano ham, laid side by side on a large sheet of clingfilm, wrap the chicken completely with the ham.

To cook, bring a large pan of water to the boil and then reduce o a steady simmer. Place the ballotines into the water cook for 15-20 mins. Remove with kitchen tongs, snip one end of the film and, holding the other end, release any juices & water over a bowl and discard, you can then place the ballotine on your chopping board ready to carve. (you can either cut into disks as shown, or slice a little off each end and then one diagonal cut so you have to pieces which will stand up on your chose plates).

You can serve with your vegetables & potatoe of choice; we often serve with a red-pepper sauce and with fresh mushroom ravioli or with saffron & chive duchess potatoes.